Boli and his wife and children live the traditional nomadic life in the beautiful Gurvan Saikhan National Park, which lies in the Southern, Gobi region of Mongolia. He is worried about climate change and has been well informed about it by his radio. 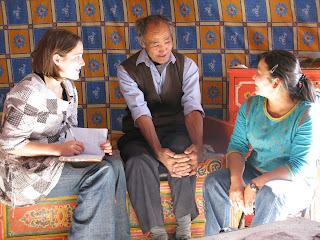 Emma, Boli and guide/translator Khuu
The last few years have been very dry with not nearly enough rain. No rain equals no grass, so Boli's animals don't have enough to eat. If they don't get fat enough over the summer, they will die in the winter. The situation is not disastrous now, particularly as the tourist trade supplements the diminishing support from his livestock, but he's concerned about how things will be in 30-40 years time if things carry on as they are. He has a longer time frame than most people I know. 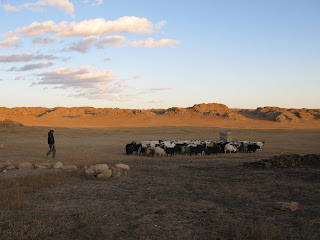 Nomadic life in the Gobi
Boli thinks that everyone should try to fix climate change and has low energy lighting, which is powered by a solar photovoltaic panel, a fixture of most gers. He is also concerned about litter, which is heartbreakingly ubiquitous here, and tries not to contribute to the problem himself.

Curiously, for someone who remembers when animals not oil were the primary power source, as recently as the 1970s, he can't imagine a life without fossil fuels. He knows this sort of life is possible but cannot see how things can go back to how they were. 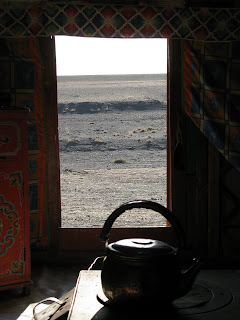 The view from a gerr
Later that day, after we leave Boli, we visit the 'ice gorge', which until recently boasted a year round ice packed crevice. Even our 2008 guidebook doesn't tell how the summer heat now steals away this impressive attraction and disappoints the many who visit in the height of the tourist season. That said, this is not all that surprising from the 'book of lies'.

Like the ice gorge, Boli's traditional nomadic family life is an attraction for tourists that is under threat from climate change. His dwindling income from the degraded environment is now supplemented by the very people who are destroying it by flying into the country in droves to gawp at a life, which demonstrates a stark contrast to their own cash-rich, wellbeing-poor existence at home.

The question that I cannot escape at the moment is whether this destruction is merely absent-minded or knowingly selfish? With knowledge of the great damage we're doing ourselves becoming clearer every day, I fear we can no longer excuse it as the former.