Dorjsuren, more commonly known as Ben (which means boy in Mongolian), is our guide for our three days of horse trekking around the magnificent eight lakes area. I wasn't planning on interviewing him but after watching my interview with Myagaa he so enthusiastically voluteered himself that I could hardly refuse. 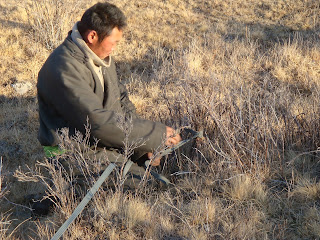 Dorjsuren
As with all my previous Mongolian interviewees, the first thing Dorjsuren ,mentions is the lack of rain in recent years, especially the last five. What rain there is tends to fall in flash floods, which doesn't soak into the soil properly and therefore fails to nourish the plants that their animals feed on. Particularly dear to Dojsuren is the local waterfall that he grew up next to. It's a big attraction for tourists but these days it's dry all by two months of the year. We're extremely fortunate to be there while the waterfall is falling, albeit as a pale shadow of its former glory. 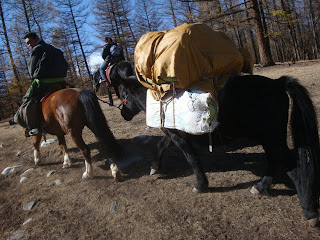 Dorjsuren with our pack horse

Climate change is a big problem throughout the country. This region is suffering from one of the many knock-on effects of global warming, increased pests. The trees, which protect the area from desertification, are being attacked by a two types of moth. They are thriving under the new warmer and drier conditions that climate change has brought. 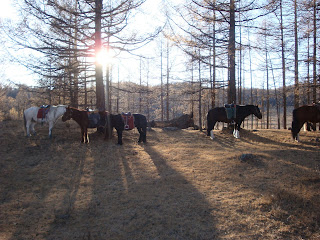 Like Myagaa, Dorjsuren thinks the government is all mouth and no trousers, talking plenty but doing little. He would like them to at least start with small problems, like helping his community fight the moths that attack their life-preserving trees. 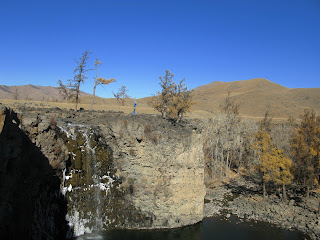 Waterfall under threat from climate change
The future for Dorjsuren is unclear, although he can easily imagine a Mongolia without fossil fuels. He thinks his son will be ok but expects his grandson might have a very hard life because there will be so little water left when his time comes.