Bor is in his late seventies, smokes a long pipe and keeps camels, horses, sheep and goats. Him and his hardworking wife, who tops up the stove in our gerr all night long with dried dung, live between a lake and a sand dune, which looks incredible to our Western eyes. 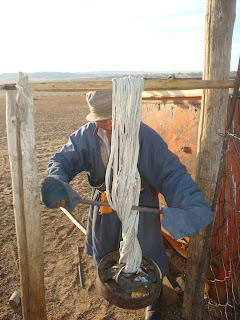 Bor at work
We wake up on the morning of the interview to an even stranger sight. There has been a snowstorm in the night and everything is covered in a thick blanket of snow. I'm told this is very unusual for this time of year. You might expect my Mongolian hosts to be pleased for the unseasonable gift of water but disgruntled mutterings tell me this is yet another unwelcome sign of instability in their previously more predictable ecosystem. 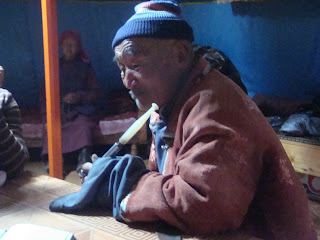 Bor in his ger
You see it's been getting drier in the last few years and now there's barely any rain. There used to be many trees around the sand dunes but there are hardly any left now. The sand encroaches ever further on the useful land and there are now more sand storms than ever. This is, of course, a problem because it makes the job of raising animals increasingly difficult. 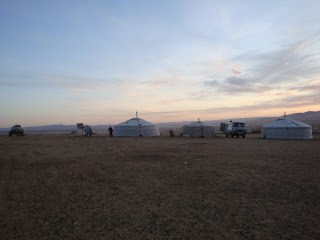 Dusk before the snow
There's a lot of information about climate change on the news and Bor's well aware that it's linked to the problems he's just told me about. Climate change is a big problem for Mongolia because it is an agricultural country. These changes are bad for animals and plants alike. 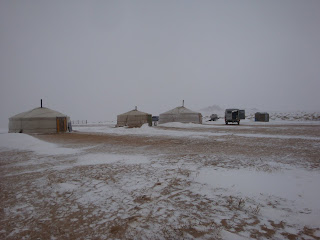 The scene we woke up to
Bor thinks scientists need to work out what to do about the problem. He doesn't know who else can fix the problem but he says he's too old and laughs. Like the other Mongolians I've spoken to he thinks the Mongolian government talk about the problem but do nothing. He says some Korean's came here and planted some trees though. 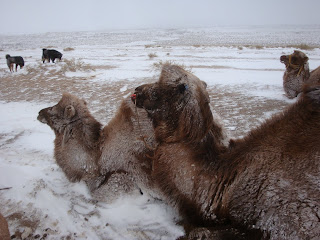 Snowy camels
With a knowing smile, Bor tells me that of course he can imagine a life without fossil fuels because he still lives that life. He doesn't have a car. He's been riding horses for seventy years. He tells me he is trying to be optimistic for himself and future generations but that the time when he will go to sleep forever is very soon now.