As we step off the train from Ulaanbaatar, Mongolia we're immediately dazzled by the realisation that the city in front of us is not the Beijing that lives in our heads. China's capital has almost completed its transformation from a sprawling city of traditional ricketty wooden buildings in labarynthine 'hutong' alleyways to concrete and steel mega-city of epic proportions that makes London and New York look like toy towns. 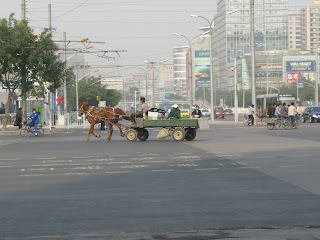 Beijing old and new
My first interviewee in China is Eric, a 20 year computer science student in Beijing. He's originally from a village outside Qingdao, the city famous for producing TsingTao beer, but has been in the big city for three years now. He's anticipating that China will be warmer, which won't be a good thing for his country and especially not for his adopted city; Beijing in the summer is mind-meltingly hot. Eric believes that air and water pollution are more of an issue here than climate change though and I can see why. Though we are visiting at supposedly the time of year when Beijing air is the clearest, the ever-present thick haze tricks me into thinking my glasses always need cleaning. 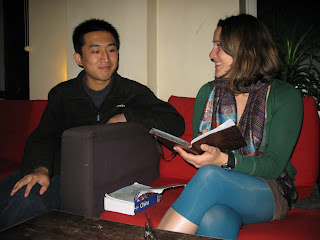 Eric & Emma
Eric drops the unsurprising but nonetheless depressing news that Chinese people are not worried about climate change. He maintains that China's priority is the economy. His friends are too busy with studying to worry too much about climate change. A poor student from the countryside must study from 5am until 8pm in order to get into a university. 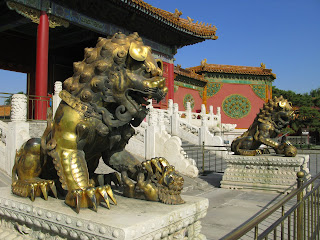 A guard at the Forbidden Palace
The government should be responsible for addressing climate change, according to Eric. They should control the number of cars and encourage people to use public transport and bicycles. When asked about renewables he says solar might be good but he is concerned that China has built too many hydro-electric dams, which are now causing ecological damage. 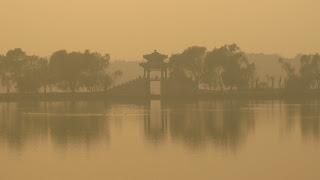 Beijing's smog can at least make for a lovely picture
The interview ends on a much more positive note than it begins though. Eric tells me most emphatically that he thinks we must change our ways for the future. That we need to reduce pollution and make things cleaner. He uses public transport although he admits he's too poor to have a choice about this and the lights in his dormitory and in his family home are low energy too.

It might also be that Eric is unnecessarily pessimistic about his fellow citizens. Bearing in mind that a recent study showed that 62% of Chinese people wanted their government to take more action on climate change. Whether their government will heed their request is another matter but the will, it appears, is there.