For three seasons of the year Vaanchig lives next to some of the most impressive sand dunes in Mongolia. In fact, he recognises his neighbour's horse on the cover of our guide book. Most of his eight grown up children have now moved away but one son still lives at home. When we arrive, a week before the family are to move to their winter residence, he is extremely welcoming. He asks each of our group how are animals are doing and offers perfumed nasal explosive, also known as snuff, both with a cheeky knowing smile. 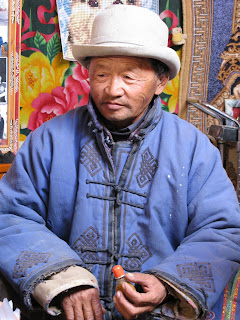 Our smiling, mischievous host has worries though and once the interview begins I see a more serious side to Vaanchig. He thinks climate change will be a big problem for Mongolia.

Especially in the last few years, he has seen big changes in nature. He tells me that in Mongolia the biggest problem is a lack of rain. This year there was almost no rain, or snow in the winter. Even the water under ground, where the roots of plants could grow down to reach is now failing. 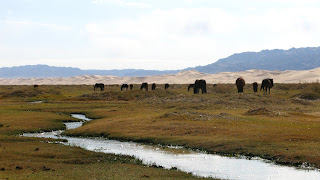 The incredible landscape in which Vaanchig lives


Compared to other parts of Mongolia the grass grows more sparsely here and creeping desertification is a constant threat. In the South Gobi there are now many more people and cars. The cars turn useful grassland to sand.

Vaanchig hears people talking about globalisation. He belives that as we live on one earth, everyone needs to try to solve the problem of climate change. It's not enough to work in isolation, all our efforts need to be connected. 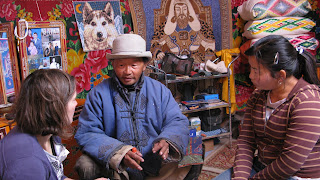 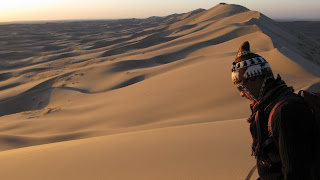 I thank Vaanchig for his time and his thoughtful opinions and get up to leave but he stops me, saying he has a question for me. He asks me if I know whether other countries have been stealing Mongolia's rain by "shooting the clouds". At first I rather conceitedly think he's referring to a superstition or that he's misunderstood something he heard on the radio. I'm humbled when Jeff, an American who we have been travelling with, realises he's talking about cloud seeding. He informs us both that China does use cloud seeding for special occasions but that they wouldn't do it regularly because it interferes with rain cycles.