Yining, 22, is a post-graduate student at the Beijing's international university, studying to teach Mandarin to foreigners. She is a Beijinger born and bred but lived in Denmark as an exchange student for a while. She thinks that Europeans generally care more about issues affecting the wider human race and tells me Chinese people only care about money, damaging our environment in the process. It's not all bad though. She's encouraged by recent signs that people in China are starting to buy more environmentally friendly products. 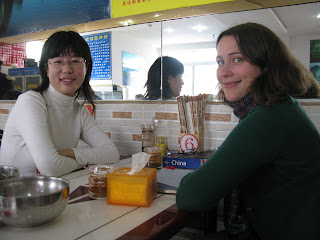 Yinning & Emma
Yinning says people here don't talk about climate change that much but that it has been influencing people though, especially recently. The weather has got really weird and it gets warm and cold at strange times. Beijing also now suffers from sandstorms coming in from the Gobi desert. She thinks this is partly because there aren't enough trees in the countryside any more. 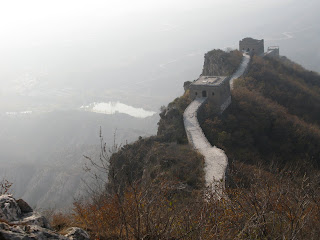 The Great Wall at Simitar, near Beijing
In Yining's eyes, it's everyone's job to fix climate change but people in the city don't see its already devastating effects so people in the countryside are more aware of the issue. In the South of China you can see people suffering from the lack of rain but in the city everyone always has enough food. She has heard that the powers that be have taken food from rural areas by force in order to feed people in Beijing. 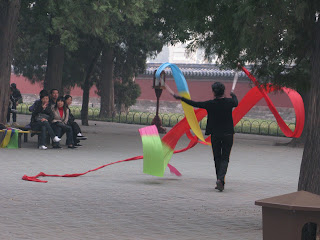 Mornings in the parks in Beijing are filled with wondrous things
Yining thinks the Chinese government should do more to regulate for the environment. She has seen adverts about saving water and energy but the country's leaders are mostly too concerned about GDP. They are talking about sustainable development but haven't yet implemented many policies and those that have been are not enforced. 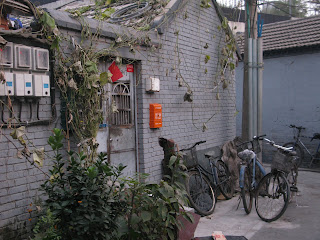 Hutongs are too small for cars but perfect for vertical vegetable growing
According to Yinning the big city governments care more about the environment. In Beijing there are restrictions on what sort of fuel you can use but not in the countryside. She then goes on to make the very valid point that no matter how efficient the cars are, the overall number of them is ultimately more significant. She wishes the restrictions were placed on the numbers of cars instead. 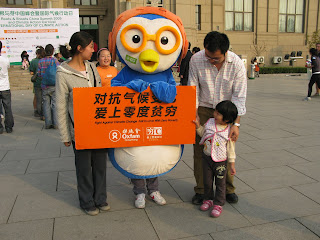 A young Chinese family at one of the Beijing 350 events
Yinning's heard about the imminent world summit on climate change Copenhagen but can't relate it to her daily life. That's the business of the government, not ordinary people. She agrees that Chinese government have more power here so things can change quicker but it's difficult for people lke her to influence them. They don't listen to their people.