We asked to meet our guide before we began the trip. Mainly because the hostel we booked the trip with were cagey about their ability to provide someone with sufficient English skills for translation purposes. As soon as Khuu (pronounced 'hoo') entered the room and said hello we knew she'd be great. Her English was fantastic and, as we would soon find out, her sense of humour was wicked. She's from Southern Gobi region but now lives in the capital, working as a guide to help pay for her sisters' education. 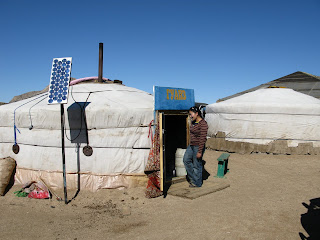 Khuu in the doorway of a (typically) solar-powered gerr
On the second day of the trip, with the backdrop of the incredible 'White Cliffs' in the Dundgov province, South of Ulaanbaatar, our conversation drifts towards climate change. Khuu tells me about how she can see the climate changing and its effect on the landscape. It's getting drier each year and Khuu discovers more rivers have vanished from her tourist trail each new season, as she makes the long trips around the country with van-loads of adventure-seekers. 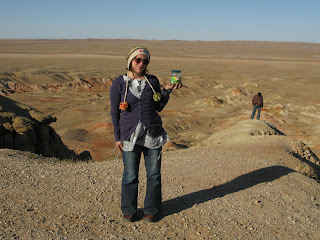 Emma (with pickles) and Khuu at the White Cliffs

The elders talk about how they used to be able to predict the seasons and the weather, particularly when there would be a good or a bad year, but this is no longer possible. Even the rain falls differently now. It comes in shorter and more intense bouts that doesn't get absorbed by the land.

These changes have had a dramatic effect on wildlife. The land used to be graced with many herds of wild sheep, gazelles and donkeys. The lack of rain has meant there's no longer enough grass or water to support them. 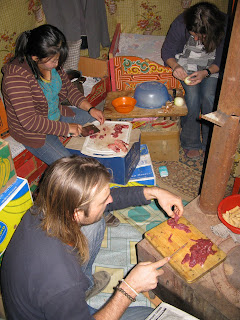 According to Khuu, everyone in Mongolia is aware of climate change as a global problem too because they have radios and some have televisions. She also tells me that looking after the environment is deeply embedded in the Mongolian psyche and promises to tell me the old folk tale, which warns Mongolians as children about the dangers of wronging the earth that supports us. 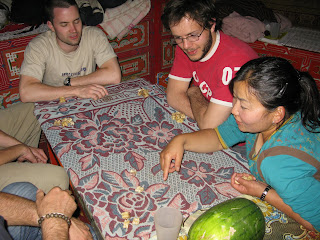 Khuu beating us all at the traditional Mongolian game of anklebone shooting
She tells me that she thinks the nomadic lifestyle will die out and that most Mongolians want to leave the country because they think they can have a better quality of life abroad. I fear she is mistaken though. We may have more money but we are demonstrably no happier for it. Rather than exporting our disfunctional and self-destructive Western ways, in the name of so-called 'development', perhaps we should show a little more humility and learn what we can from societies like Khuu's before we obliterate them completely.