I like Irkutsk right away. It may be the crisper, colder air that gives the city a light feel about it. I am also pleased by the energy efficient light bulbs in the cafe we go to for breakfast but less impressed with the food which remains dominated by meat dumplings.

Masha is twenty three and works at the relaxed and friendly Baikaler hostel. We are shocked to find ourselves thrown into traveller culture for the first time on our trip. I find myself drawn more to talking to our host rather than to other travellers though, and not just for Climate Stories purposes. 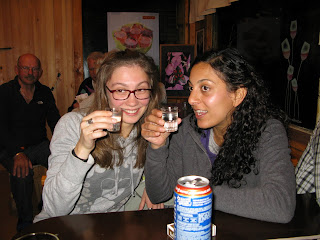 Masha & friend Seema enjoying a relaxing Vodka
Masha is the first person I've met who strongly states that climate change is a big problem for Russia. She laments the lack of even basic recycling in her country, or even an awareness that such a thing is possible amongst Russians.

She believes the government must take responsibility for tackling the problem, which is looking much more hopeful these days. She agrees sadly with the Russian saying that you get the government you deserve though and doesn't have much hope they will do enough.

She doesn't think that Russian people are aware enough of climate change. She tells me that things will only change in Russia because that is the way the rest of the world is going, she thinks the nation follows, rather than leads with such matters. 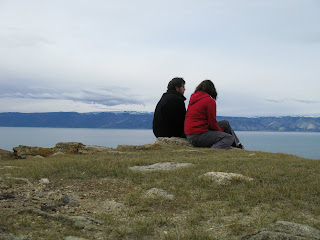 Will & Emma enjoying the view of the beautiful and vulnerable Lake Baikal
The Russian word ABOCb, pronounced avoss, which is roughly equivalent to saying “what the hell, I know something bad might happen but I'm just hoping it will be ok anyway”. She tell me this way of looking at the world is thoroughly embedded in Russian culture, so much that it's a common part of the folklore and fairy tales.

Masha claims to be a realist but talks more like an optimist. She says she expects the worst but hopes for the best. It's difficult to argue with her.