We meet Namik on the overnight train from Moscow to Kazan. Along with our other cabin-mate, as well as half the train it seems, he is on his way to his military school reunion. He's originally from Baku in Azerbaijan and his parents never wanted him to go to military school. They warned him he would be 'married to the army'. 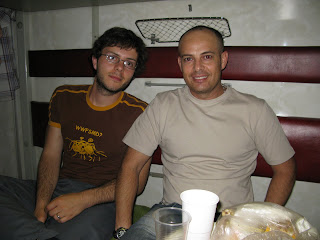 Will & Namik
He tells me the Western world pays more attention to issues like climate change because people from the East are more worried about today. People here are more concerned about their job and their basic needs. He says that 70% of people in Russia are not able to meet their basic needs, although from what I can gather, this may be an exaggeration.

He tells me he's noticed that the weather is changing though. He visited a place in the North of Russia recently and was told it would get dangerously cold there but it never did. The people there said they had been used to temperatures of 35 degrees centigrade below zero but for the last four years it hadn't got anywhere near that cold. 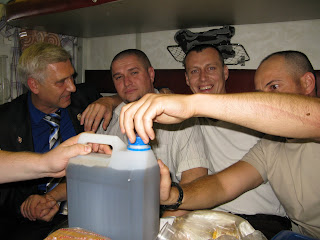 The Russian military men ... and a gallon of brandy
It's now one thirty in the morning and it's at this point that six burly ex-military Russians stumble into our cabin with a gallon of home-brewed brandy, insisting we help them drink it. The booze is surprisingly pleasant and so is the company. The interview is over but our first night on the trans-Siberian railway has just begun.