My last night night in Moscow we do something we'd been a little disappointed to have avoided so far. We drink vodka. Lots of it. I manage to interview two more people, both in their mid-twenties, before I am completely inebriated. Tanya works for a cosmetics company in a swanky office next to a contemporary art gallery and has the most sparkling smile in Moscow. Dennis works at a cool young TV station that shows mainly cartoons for teenagers, of the Southpark ilk. 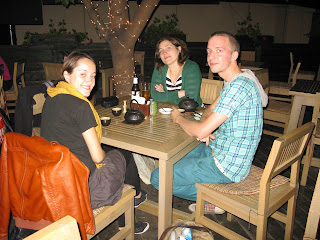 Tanya, Emma & Dennis
Tanya isn't familiar with the term climate change as related to global warming is and admits that when she first heard about the Climate Stories project, she thought we were documenting how the weather changed through the regions we're visiting. Having clarified that we're referring to the global environmental problem, she confides she hasn't really thought about it much. She is a massive animal lover though and worries about what impact it will have on wildlife. She is disturbed by the idea that climate change may wipe out up to 50% of all species by the end of the century.


Dennis, Vova, Emma, Tanya & Will
Dennis carries that slightly distant air about him that deeply creative people often do but he is immediately likable. I'm surprised to learn that he is a teetotal, non-smoking vegetarian, which must surely be a rarity in Russia. He is concerned about climate change and thinks that it's everyone's job to fix the problem. He thinks it will take a natural disaster to make people in Russia wake up to the reality of the issue. I tell him this is not a Russian state of mind but a human one and remind him that the US became a lot more concerned about global warming after hurricane Katrina. He high fives me at the end of the interview and I leave Moscow with more hope for the future than I arrived with.