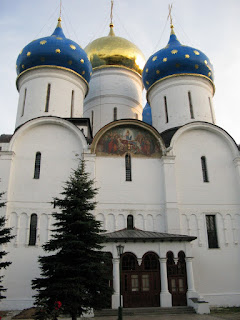 So we arrived in Moscow and immediately left again. We were whisked out of the city on a road trip with the lovely Fedya and Tanya, with whom we are staying. Four of their wonderful friends came along too.

We visited lots of churches. Now before you start yawning, churches in Russia are a totally different kettle of fish from European ones. They look like delicious confectionary for a start. The ones in Sergiev Posad were particularly impressive.

We stayed in an awesome old Soviet hotel in Uglich, which has to be seen to be believed. We were warned not to park our cars outside because the people coming out of the disco in the same building might vandalise the car and we were lulled to sleep by the sound of techno. It was very cheap. 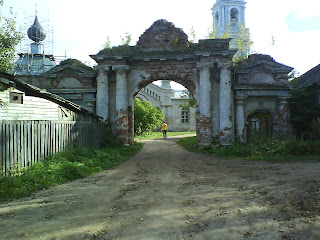 I spoke to the six yound Muscovites about climate change the following morning over breakfast. I'll write more about what they said later but in general the debate here is clearly far more advanced than I had been led to believe. I have been hugely encouraged by the conversations I've had so far.

I'm pleased to say that my first suspicions of Russia have been confirmed and I think we're going to have some good memories from this part of our trip.