From Russia with love

On 13 September 2009 I sit down to lunch in Uglich, near Moscow, with six twenty-something Muscovites, who have agreed to speak to me about their thoughts and feelings on climate change. They are clever, funny, politically aware and, well, cool. As is befitting of a society with so recent a history of state propaganda, they are suspicious of what the media has to offer.

Someone says they think climate change is a big problem for Russia but this is contentious and someone else thinks the country has more pressing issues. Another proposes it might improve the nation's situation, with better weather conditions. According to a recent report from the World Bank Russia has more to lose than most countries from climate change. 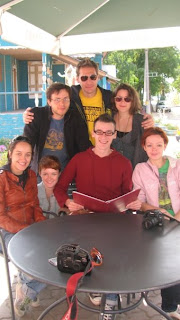 Tanya, Lola, Will, Fedya, Shev, Emma & Julia
I'm told that people care more about it in Western Europe and North America than here and that this is because these countries don't have real problems to worry about. One girl likens this to the story of her friend, who on her return to Russia after several years in the US, was shocked to discover a general lack of concern about cholesterol.

One of the group believes climate change to be a natural process, that the human role is exaggerated and we overestimate the significance of the time in which we now live. Another thinks it might be little more than a money making exercise, likening the green industry to the producers of flu vaccinations, whom she believes have exploited the current swine flu panic for profit. Bearing in mind that the richest companies are still those in the business of extracting oil and that most people who work in the environment sector do so for low wages or even for free, I'm not sure this accusation is fair.
Renewable energy is not a popular option here and someone espouses that frustratingly common myth that wind generators don't 'payback' the energy used to create them I can't help myself but interjecting to correct them. Nuclear is a significant energy source here and oil is cheap in Russia. They all tell me they think the oil will run out though. 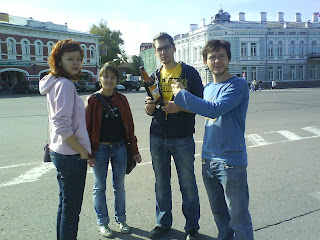 Julia, Tanya, Fedya & Will
The group agree that weather patterns have noticeably changed in recent years and that this is a common topic of discussion amongst the people they know. They say there is no longer a need to wear the heavy winter clothes of previous years but that they do not know whether this is a long term trend or a short term blip, acknowledging the difference between climate and weather.

What I have not come across in this interview is general apathy, or the refutation that climate change is happening at all. This group leave me with the sense that climate change is more of a current issue in Russia than it might initally appear, as born out by their government's recent major u-turn in their policy. I have only just scratched the surface of Russian psychology but I can already see that it may be more difficult for my British brain to decode than I had bargained for.